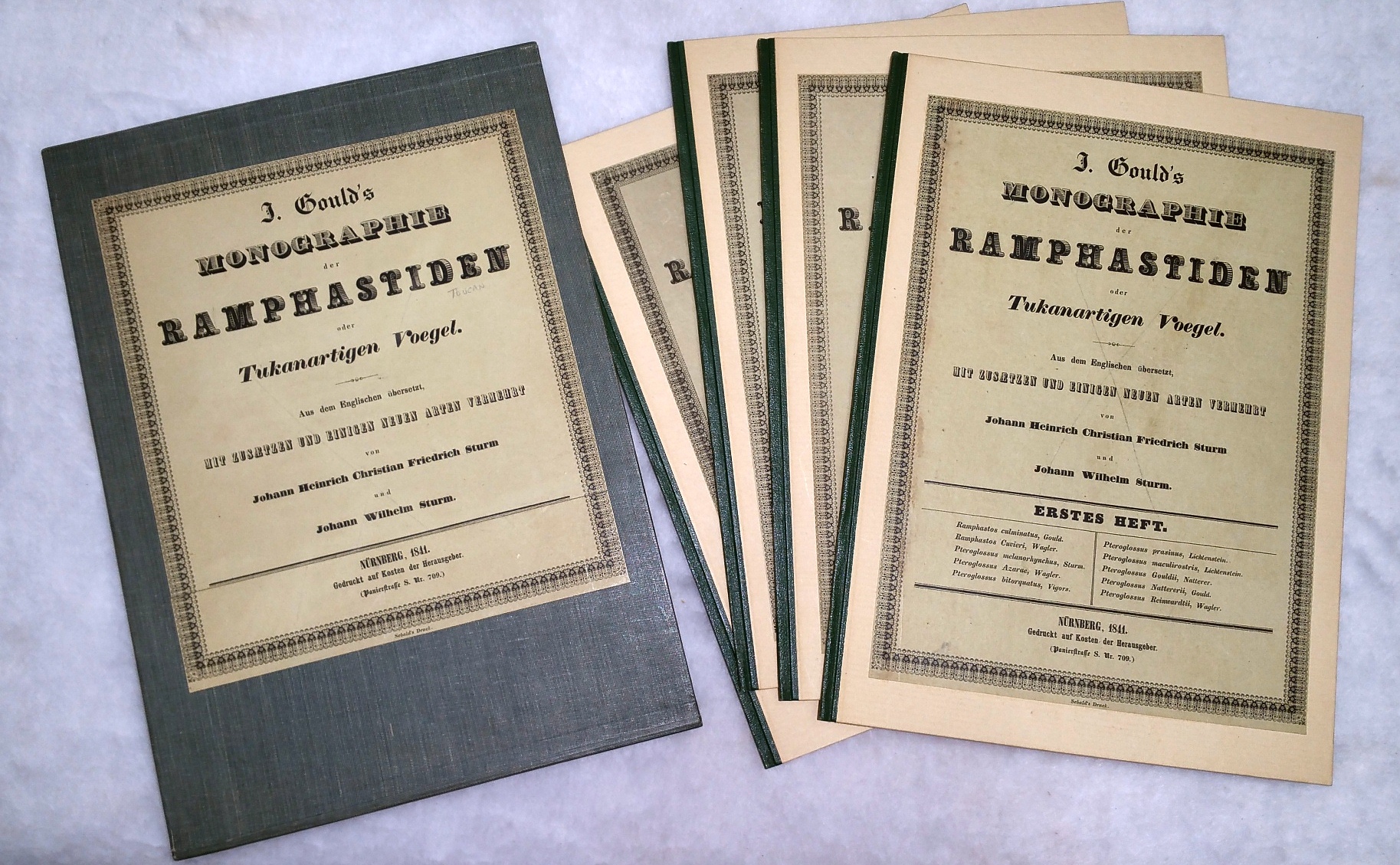 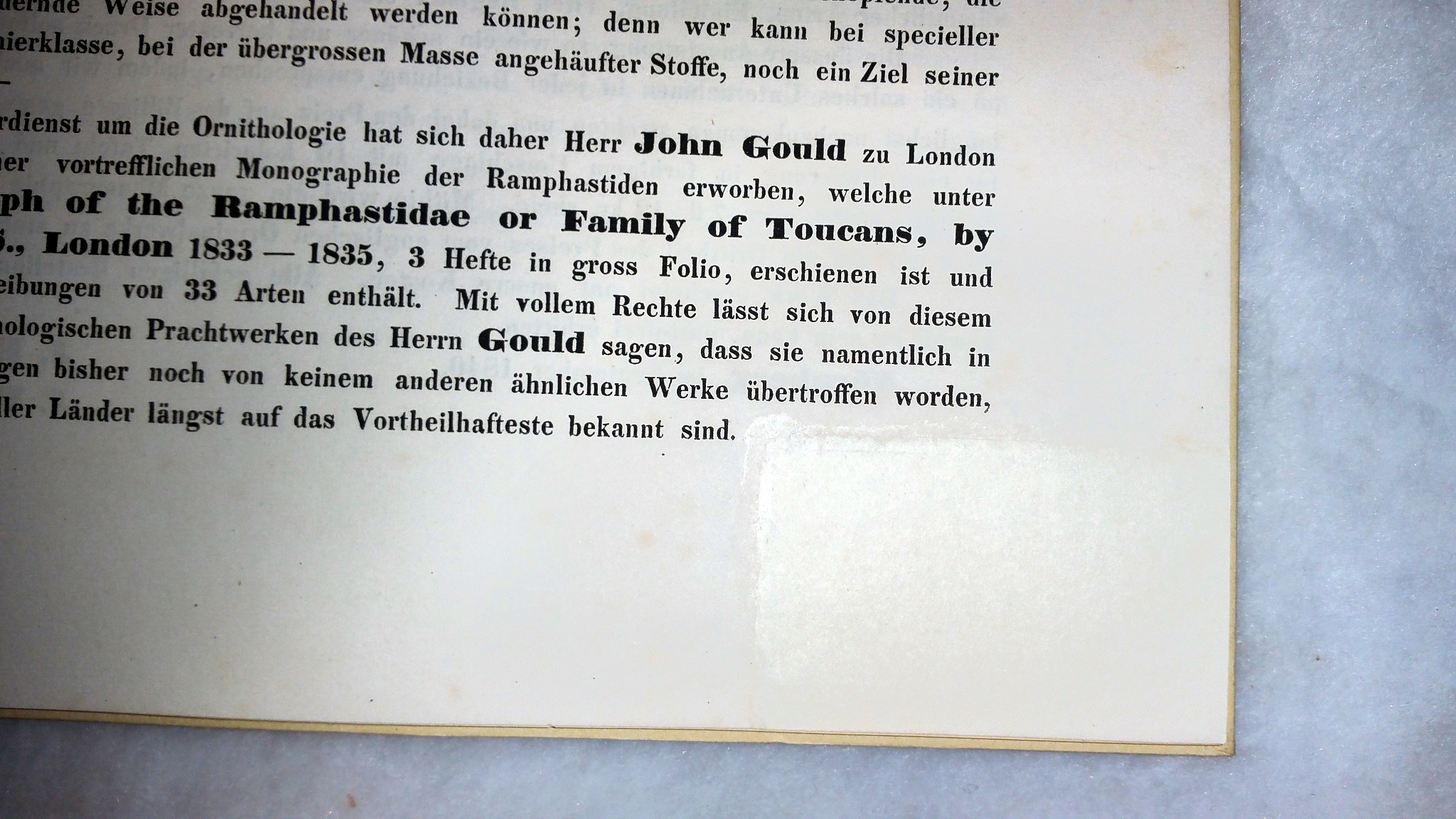 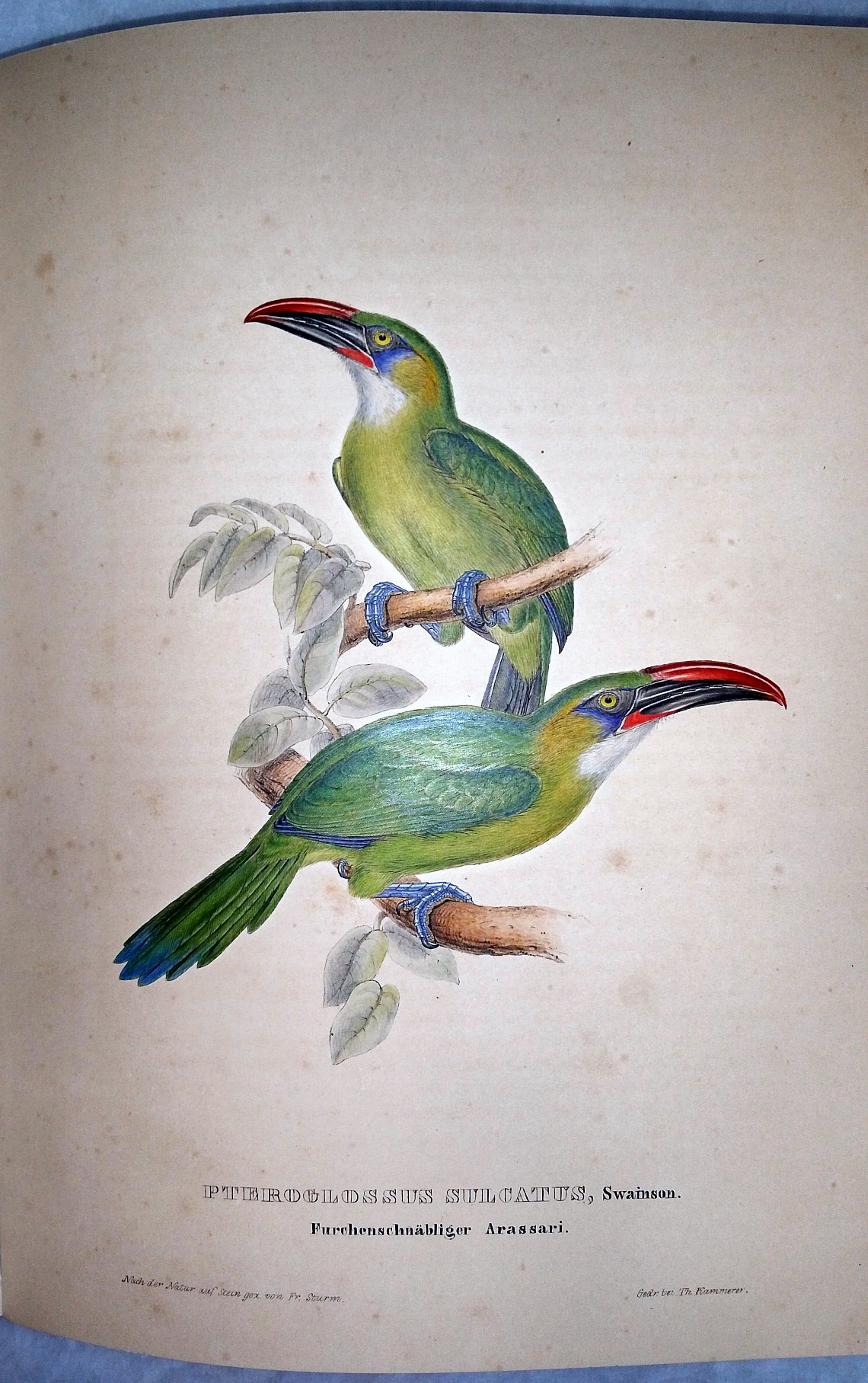 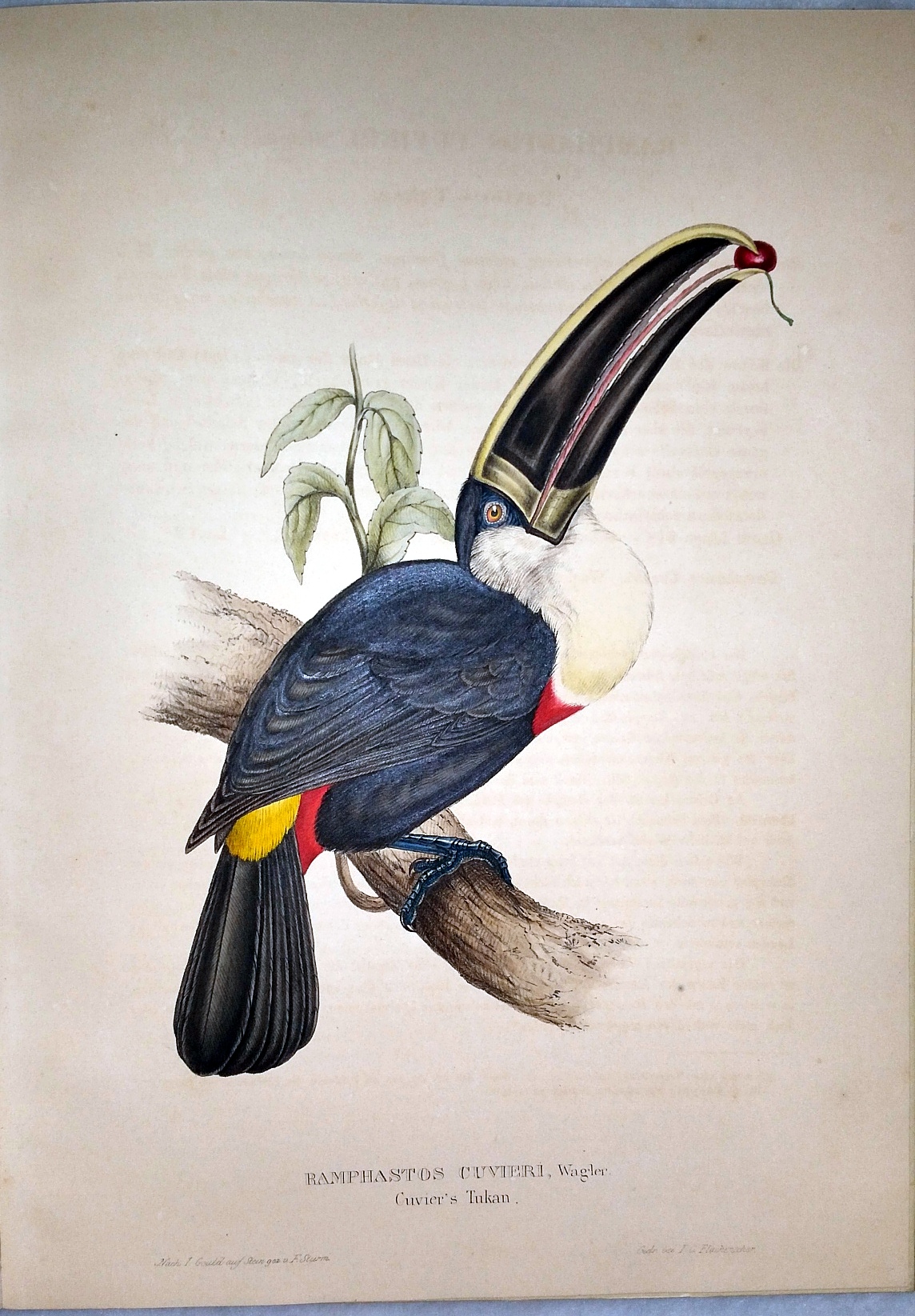 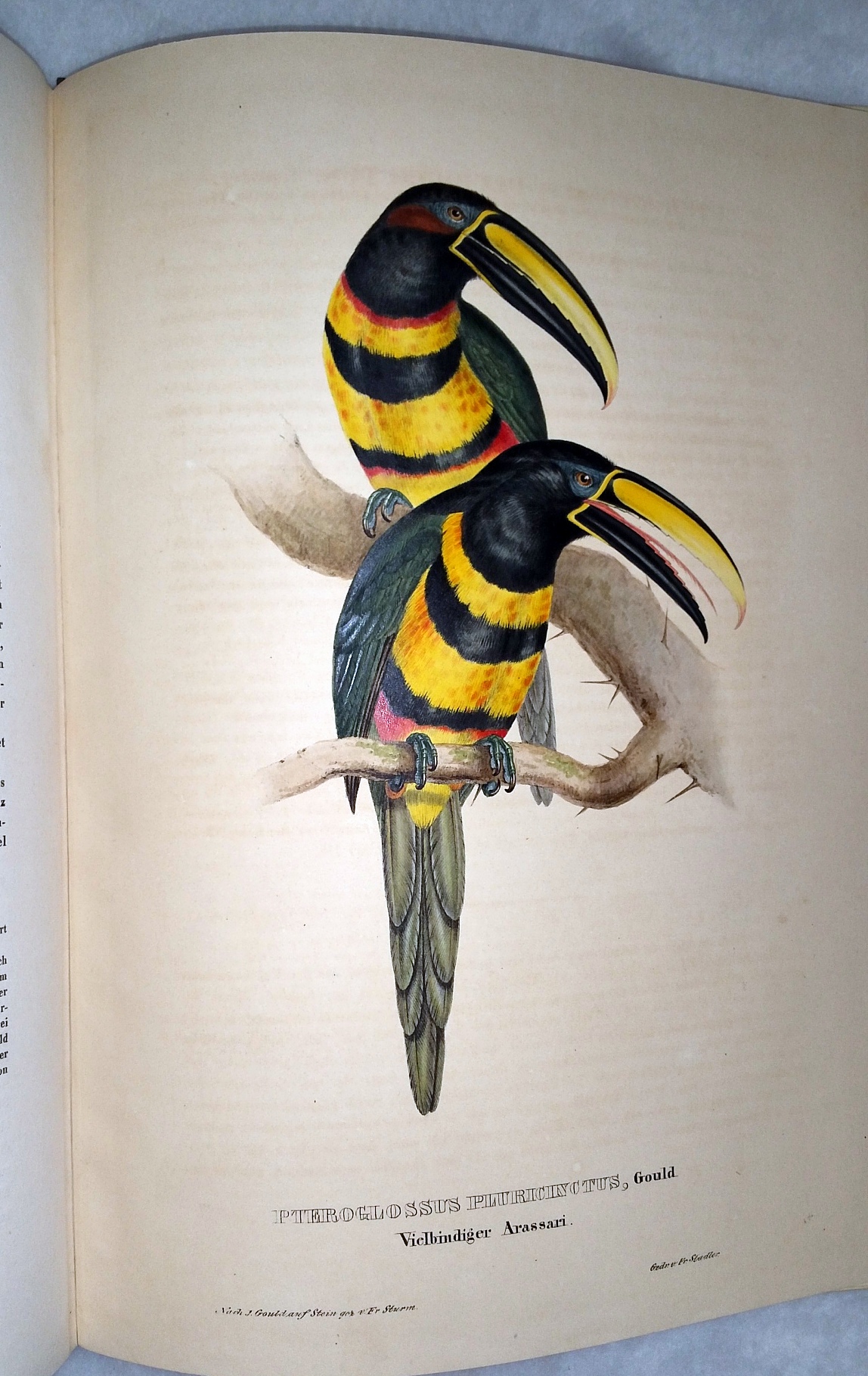 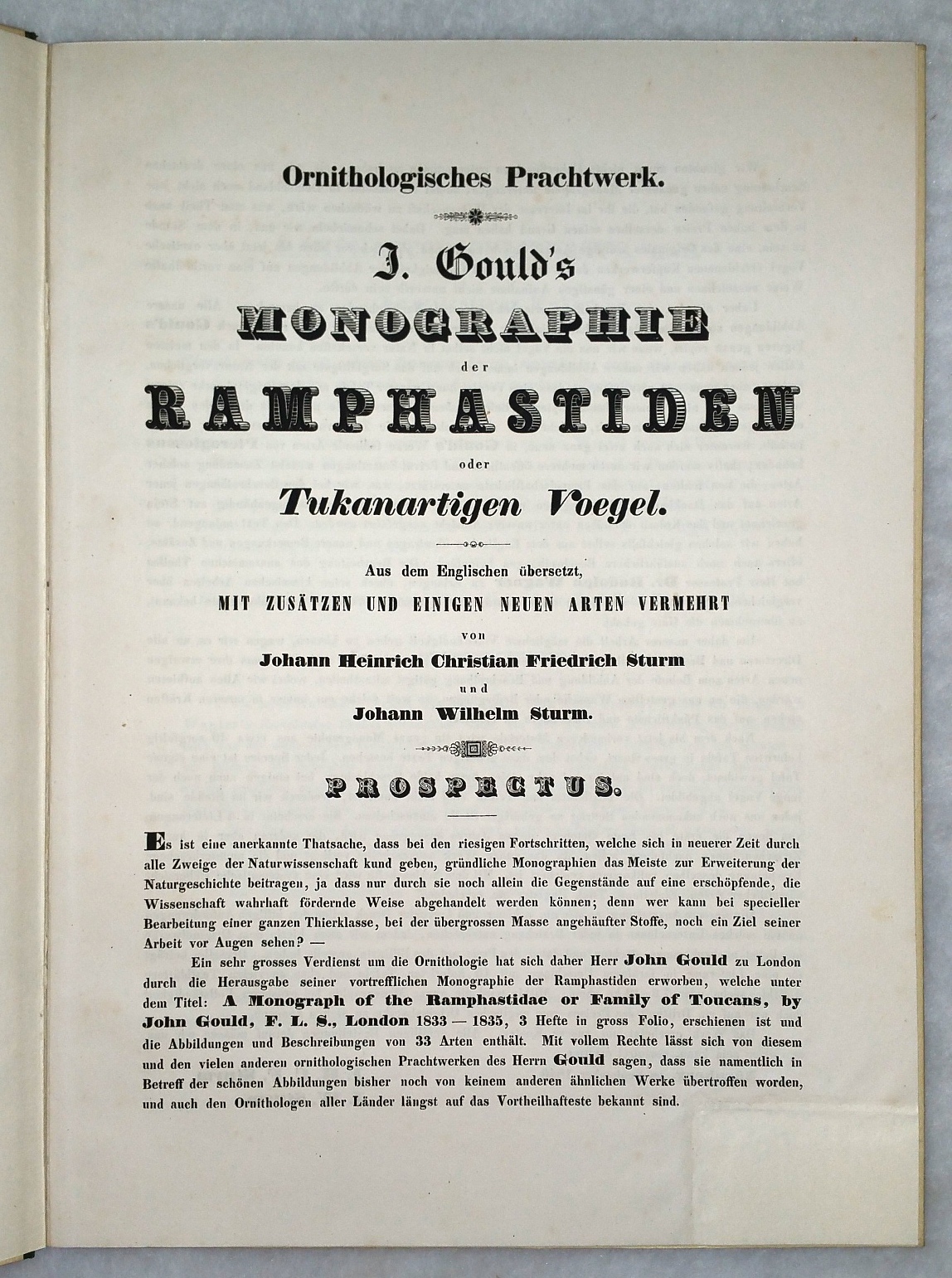 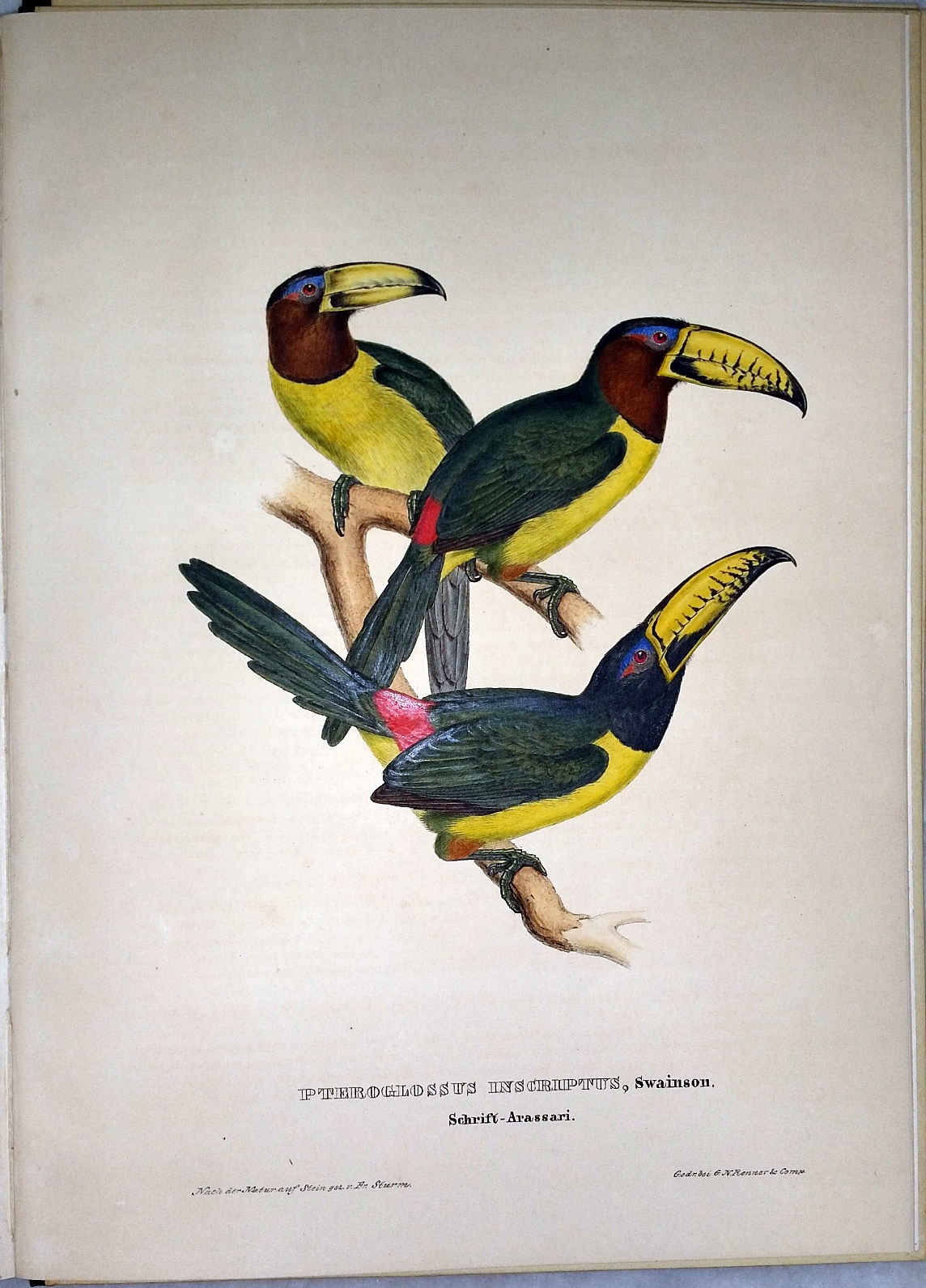 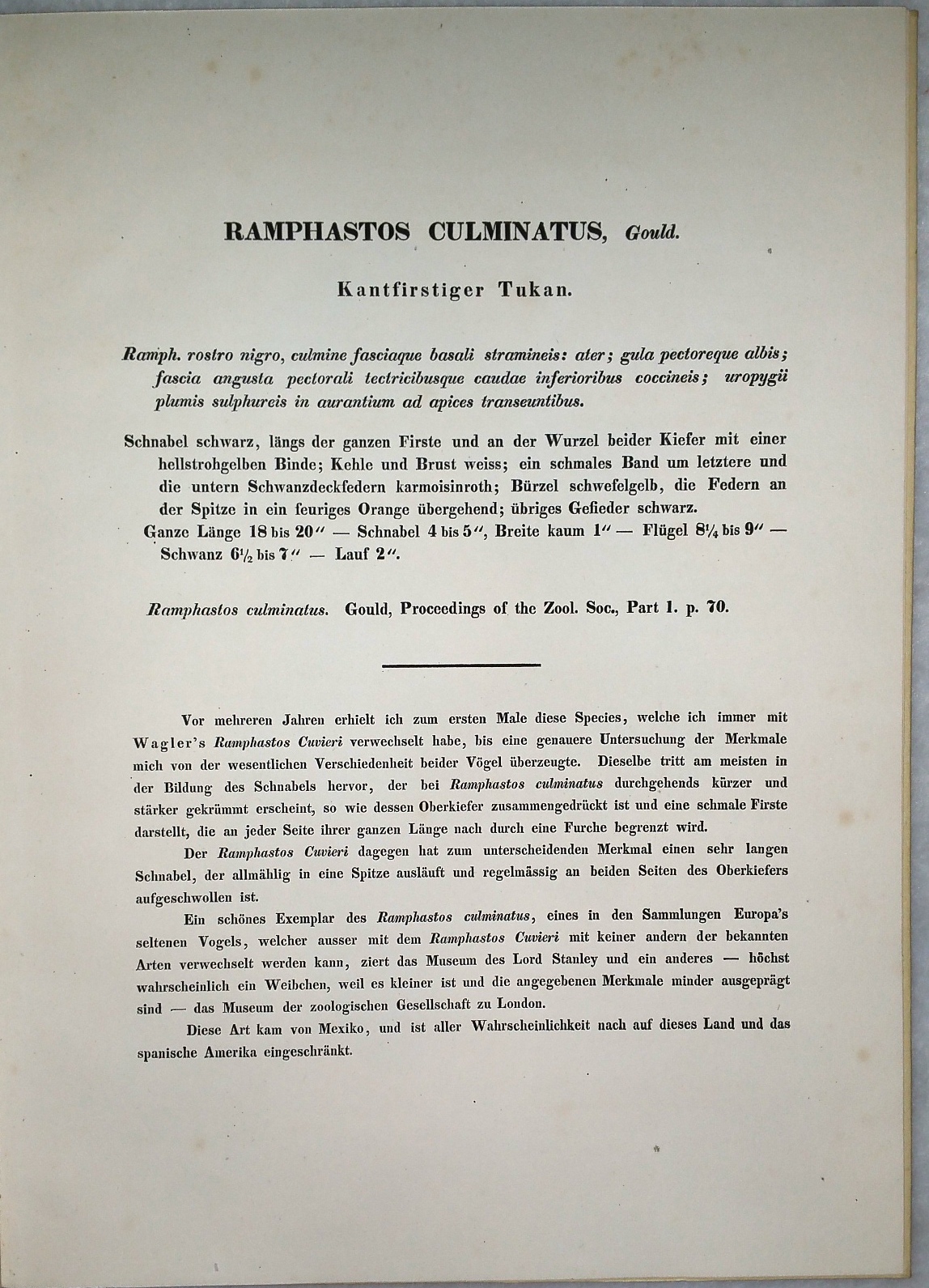 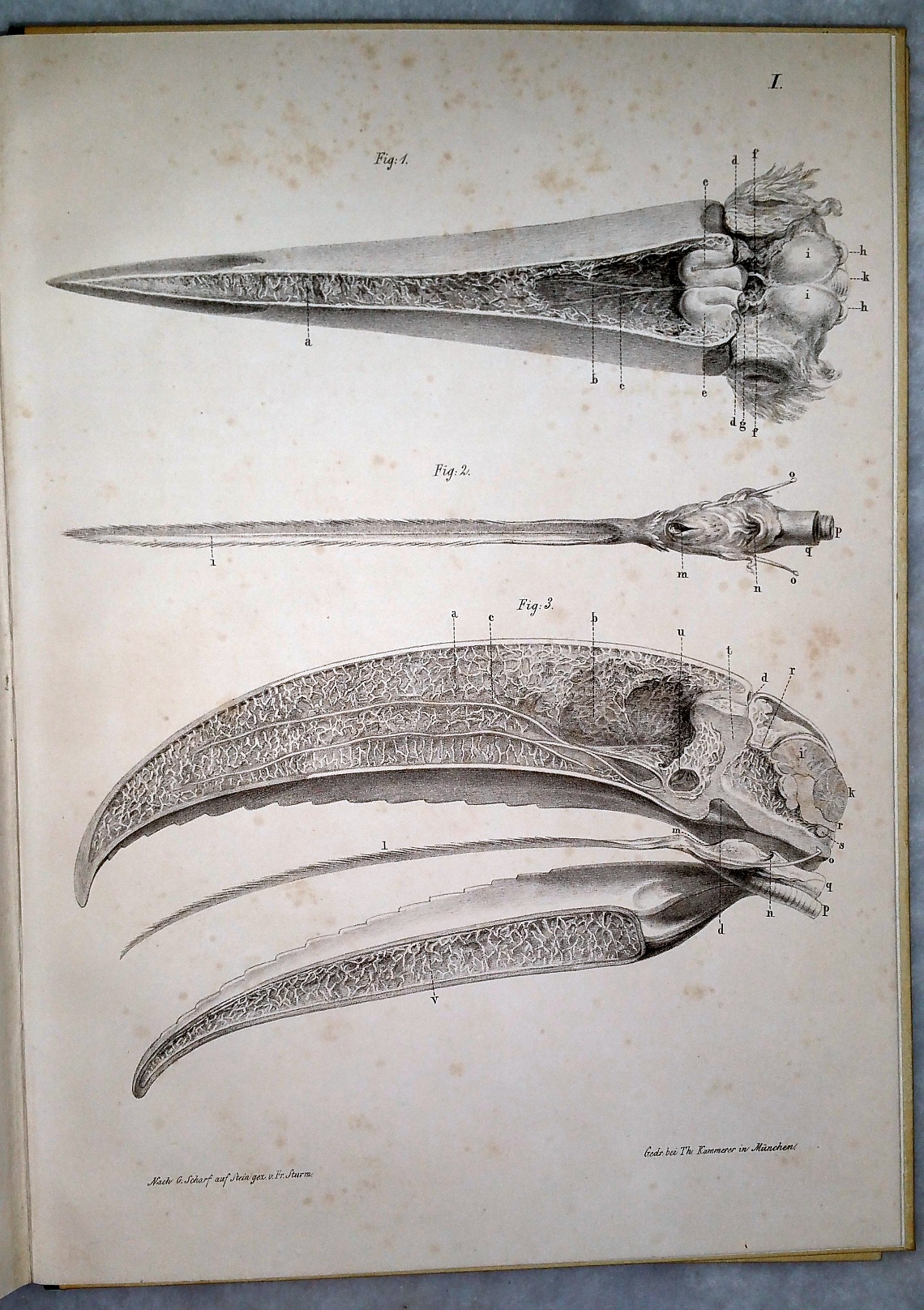 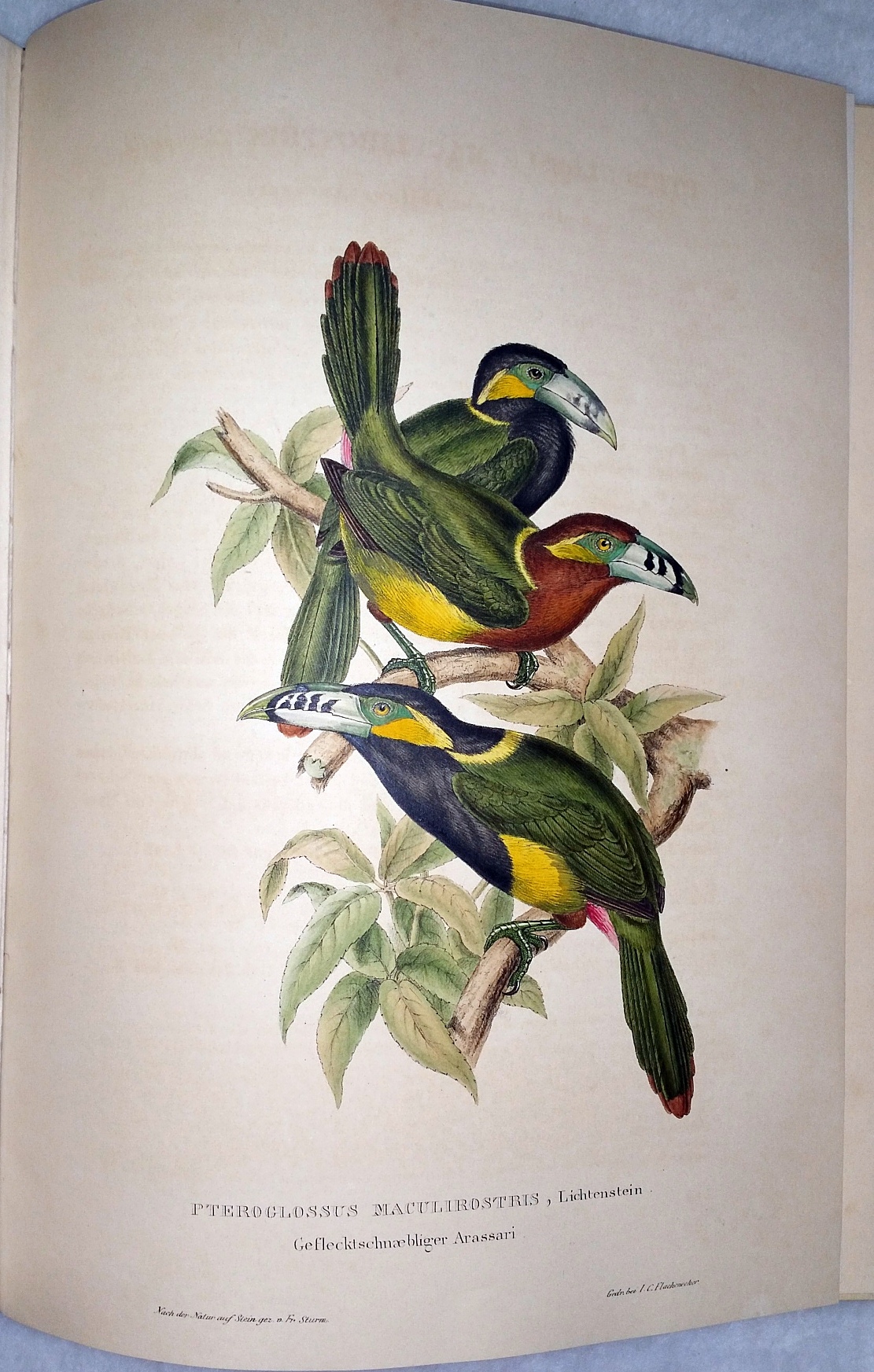 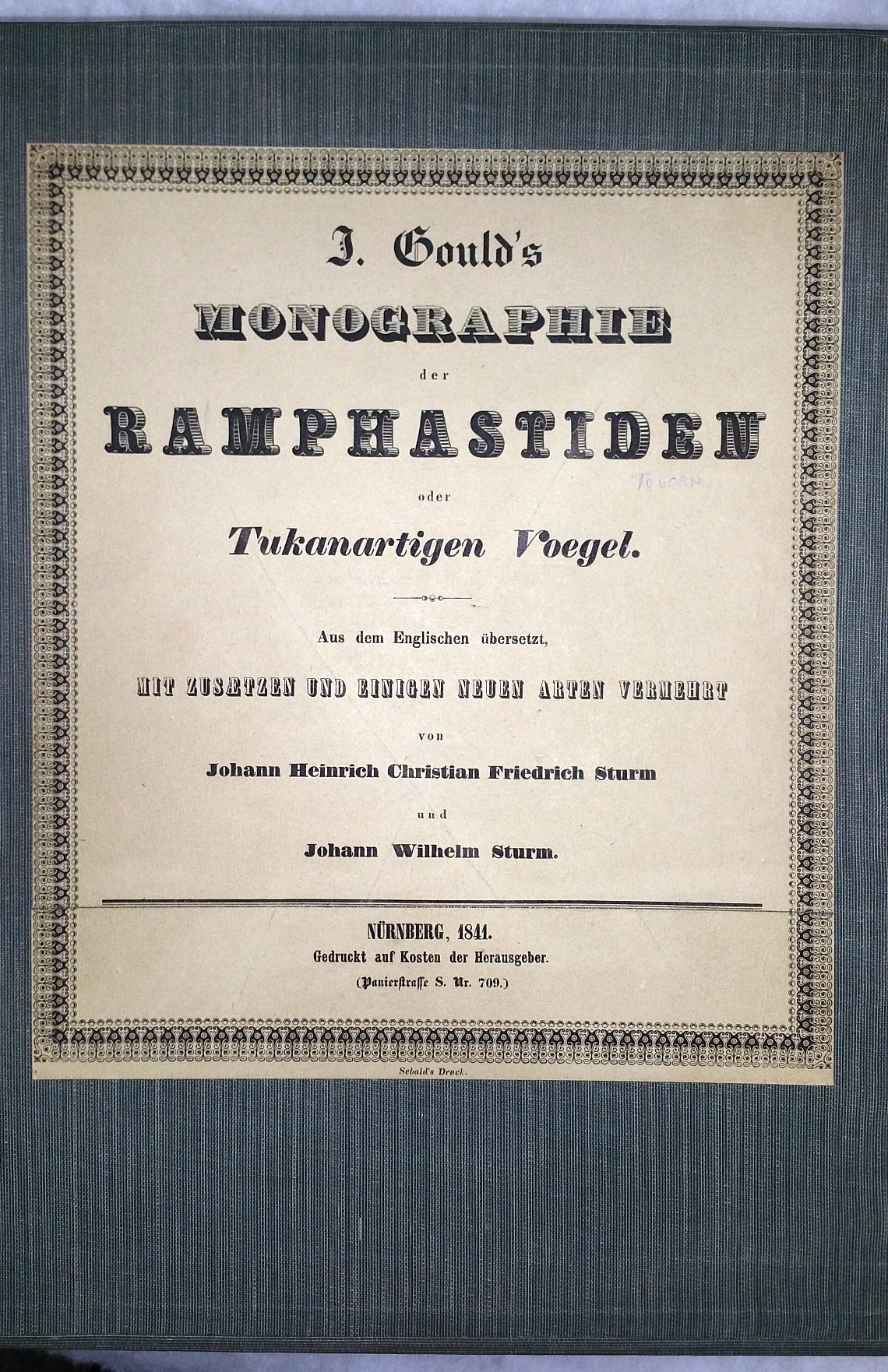 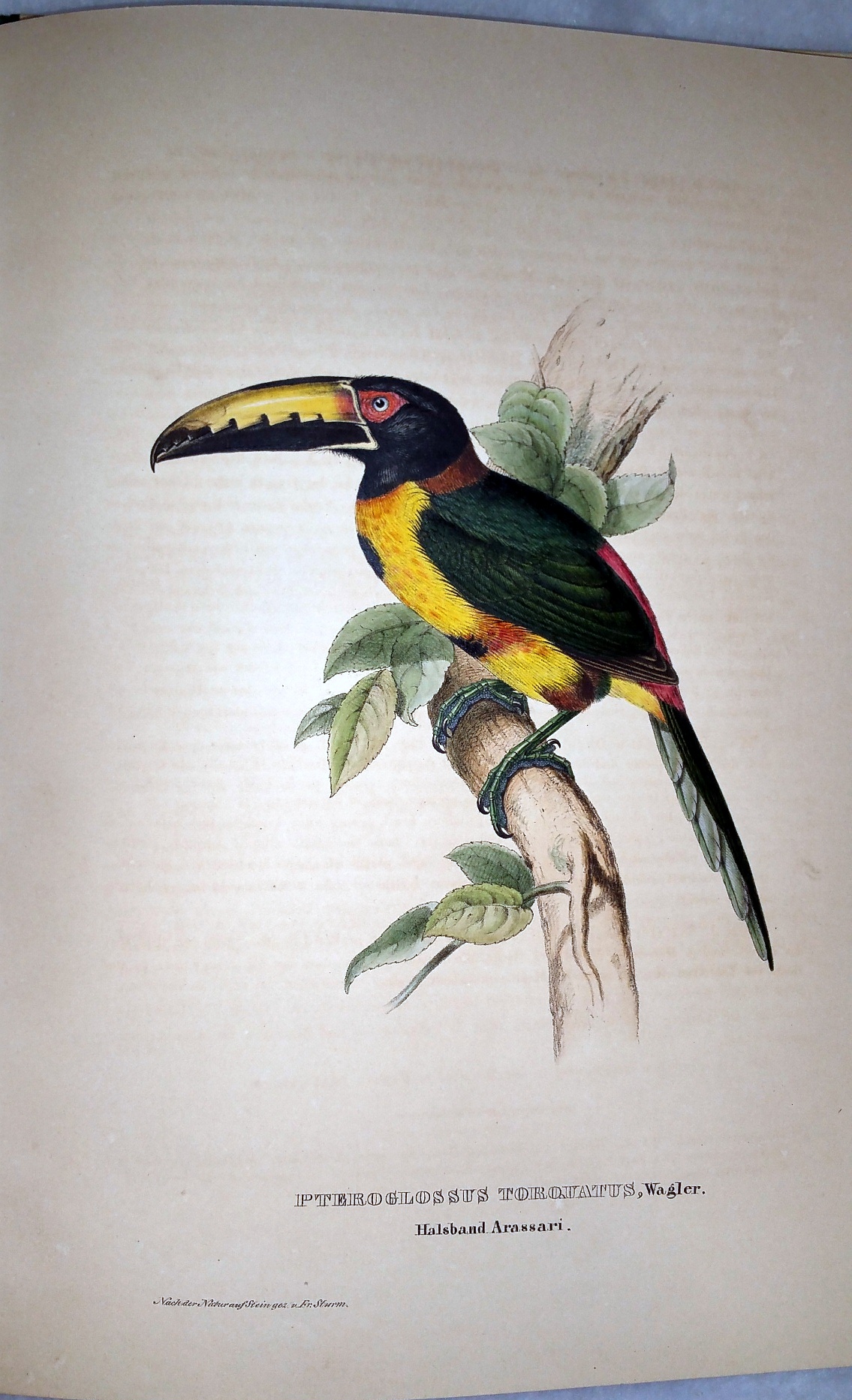 Issued in four parts from 1841 to 1847, and preceded by a prospectus. 36 hand colored lithographs after Gould and Sturm, and two black and white plate after G. Scharf, and A. Koppel. This set has been professionally restored and rebound, mid-20th century. All text leaves have been bleached and cleaned. Text and plate leaves have been trimmed to approx. 12 1/2 x 9 inches. Each part has been separately hardbound with green cloth over spines, and light tan paper over boards. The original covers have been trimmed to approx. 11 x 8 inches and affixed to new covers. The two page prospectus by both Sturms is dated 1840 and bound into the first part. The prospectus cover is affixed to a custom, cloth covered, slipcase that houses all four parts. Original paper covers show some light penciled marks on the prospectus cover and Part I cover. All of the original covers show some wear, though original lettering and border decoration remain good. Later bindings remain Fine. Lower outside corner of prospectus page shows a 1 x 2 inch replacement of lost paper, not affecting any of the text. Text leaves are bright and very clean, showing only occasional light and small foxing. Plate sheets are just a little age toned and show light offsetting and occasional foxing. Images remain very bright and clean. Zimmer (1926, page 256) states: "...Pts. I-III contained 10 plates and 10 leaves of text, each; Pt. IV contained 6 colored plates and the accompanying text, and a translation of Owen's article on the anatomy of the toucan with its plate, to which is added a second plate and further remarks by Rudolf Wagner. The principal part of the general text is based on Gould's Monograph of the Ramphastidae," 1833-35 (q.v.), of which it is, in places, a literal translation; but considerable of the matter is rewritten or revised and there are additional species described herein for the first time. The plates are sometimes redrawn and reduced from Gould, but frequently altered or designed afresh, while the illustrations of the new species are entirely new. There is no title page, since the work was never carried to completion..."