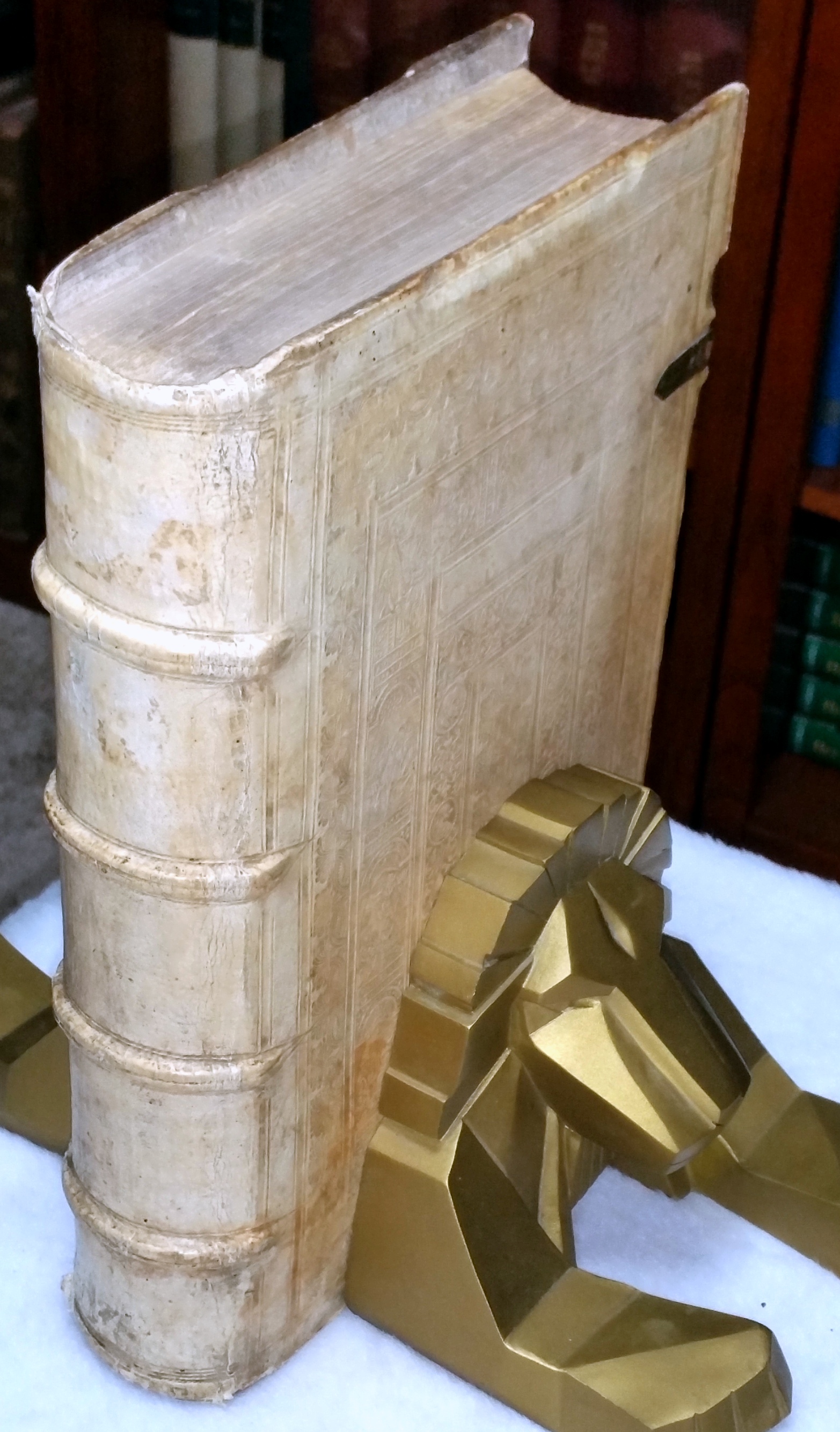 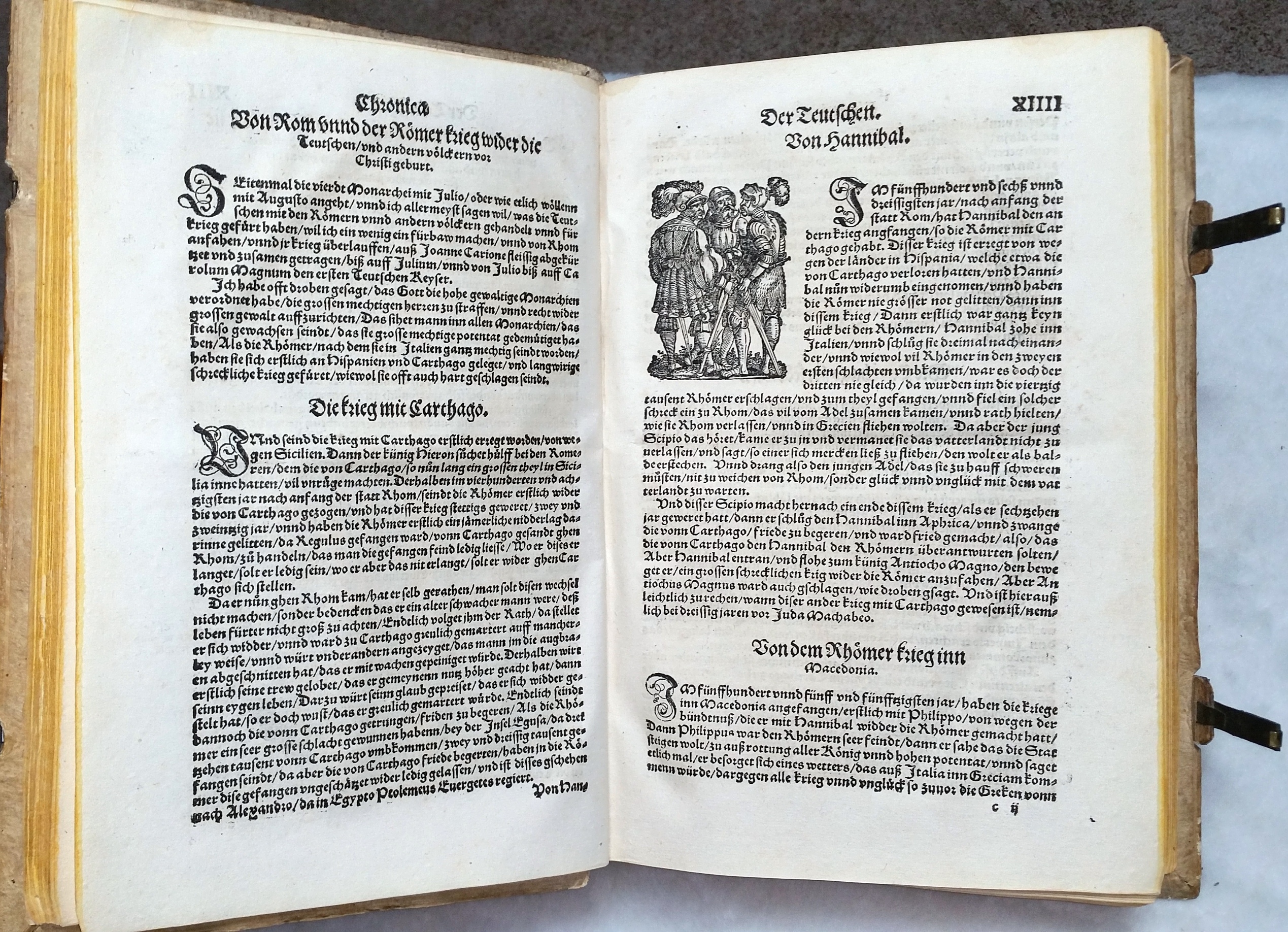 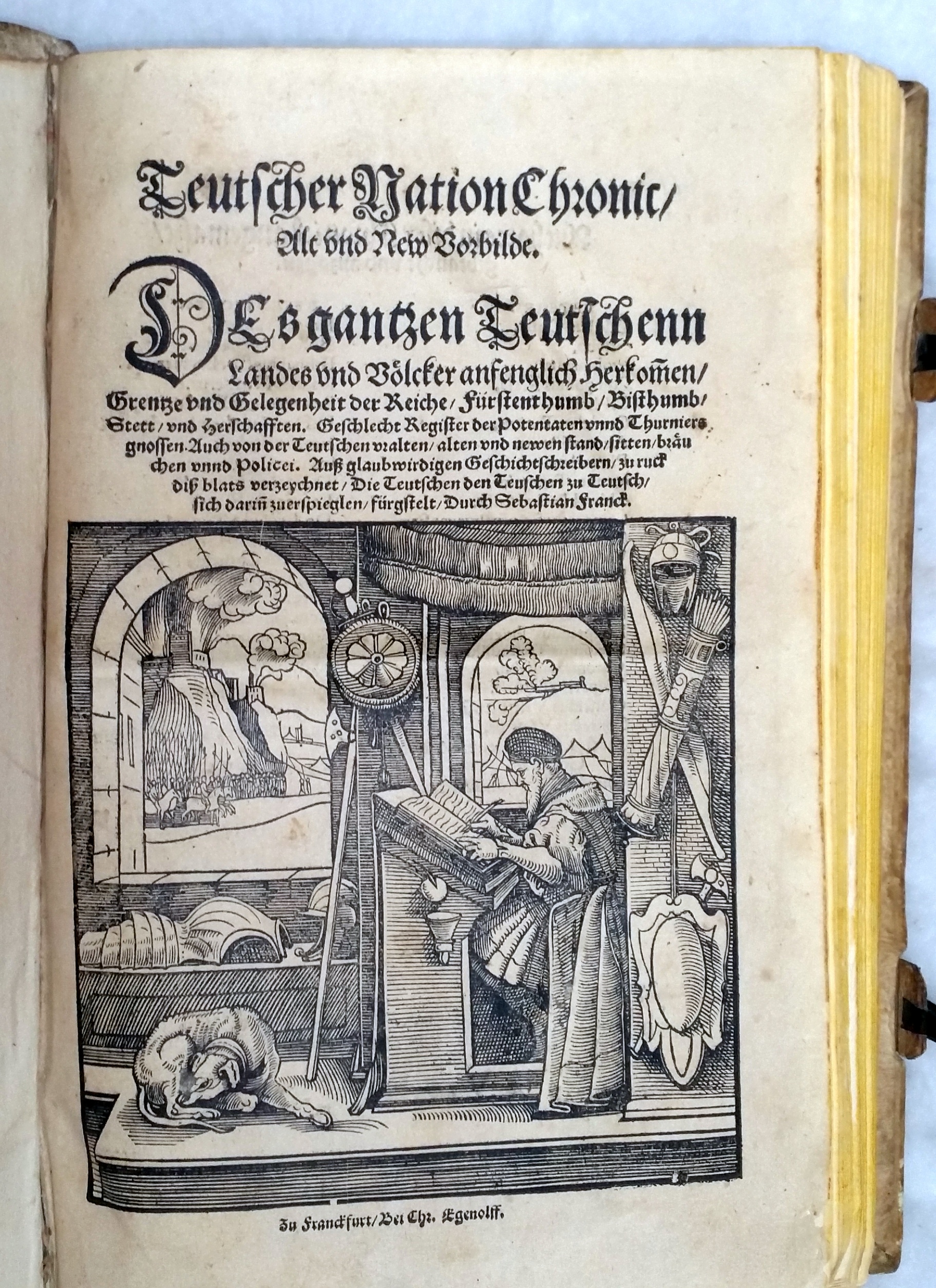 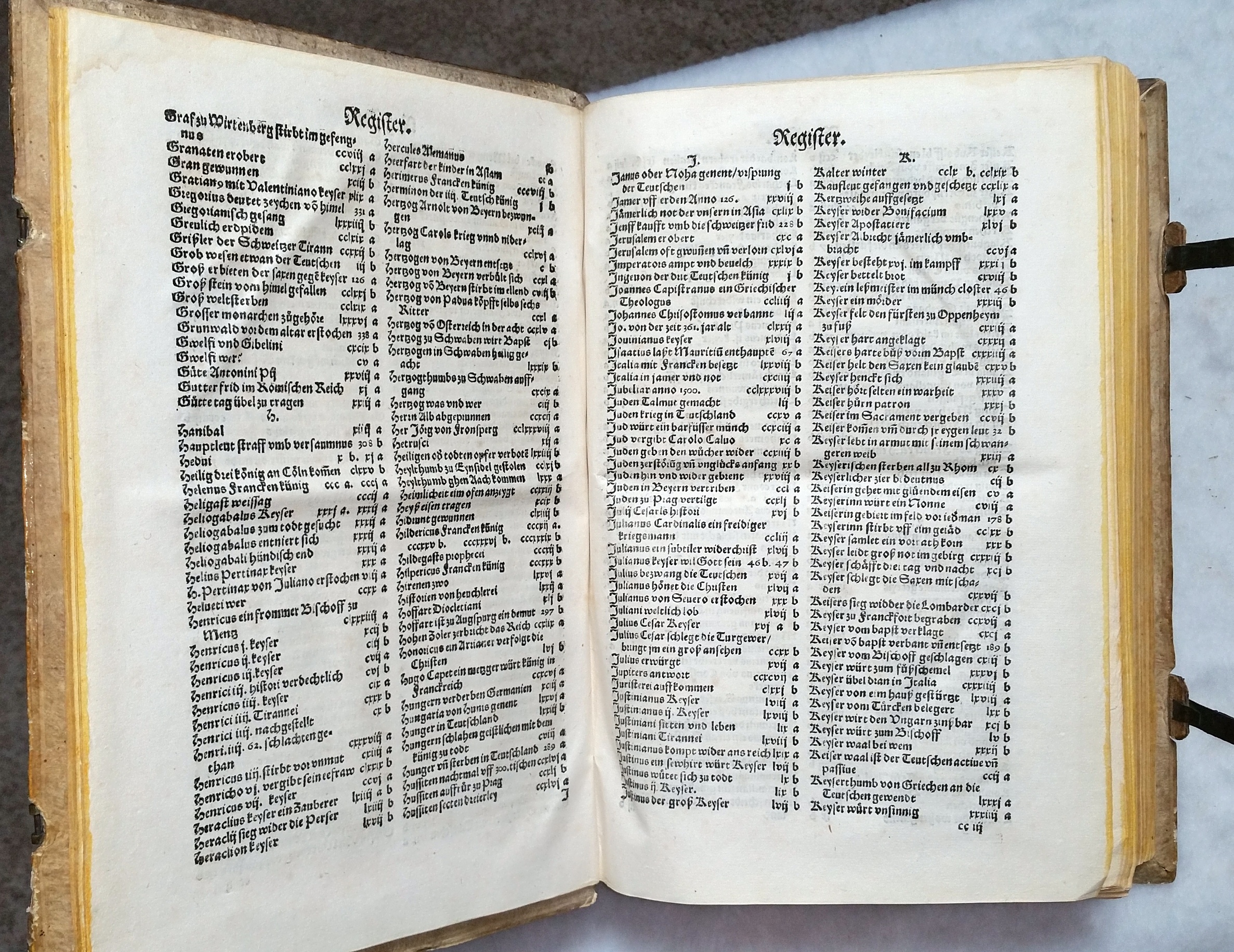 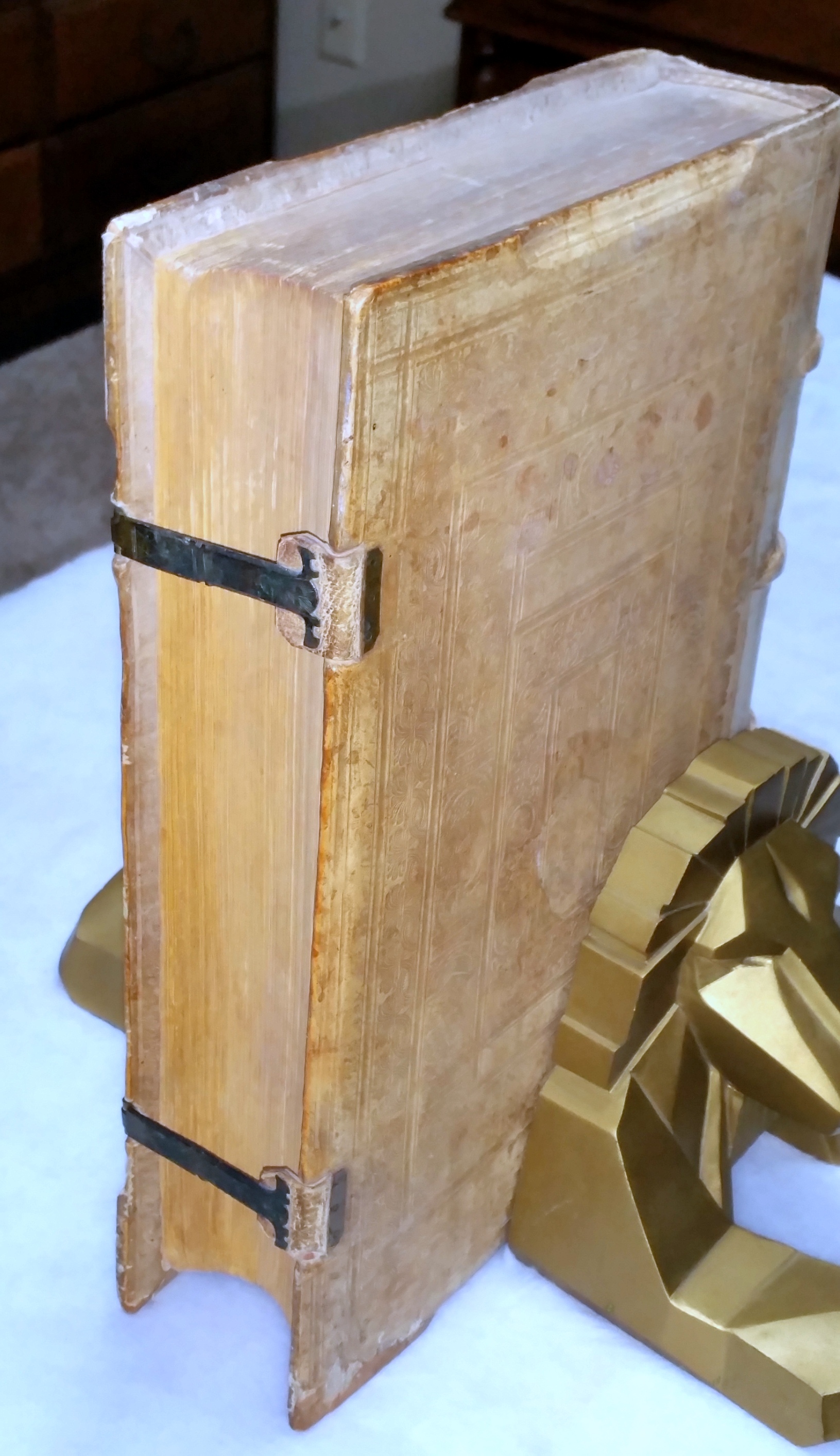 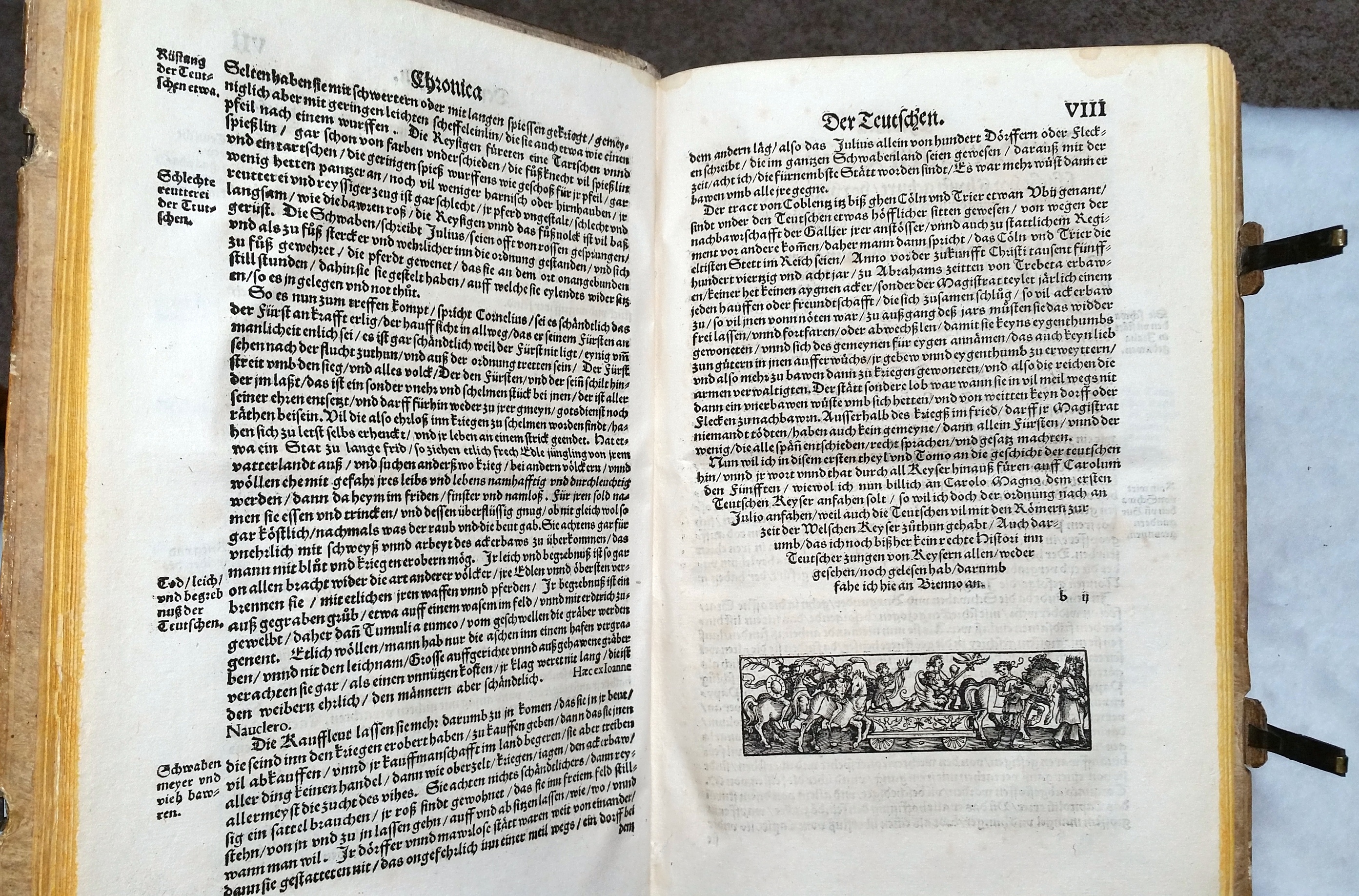 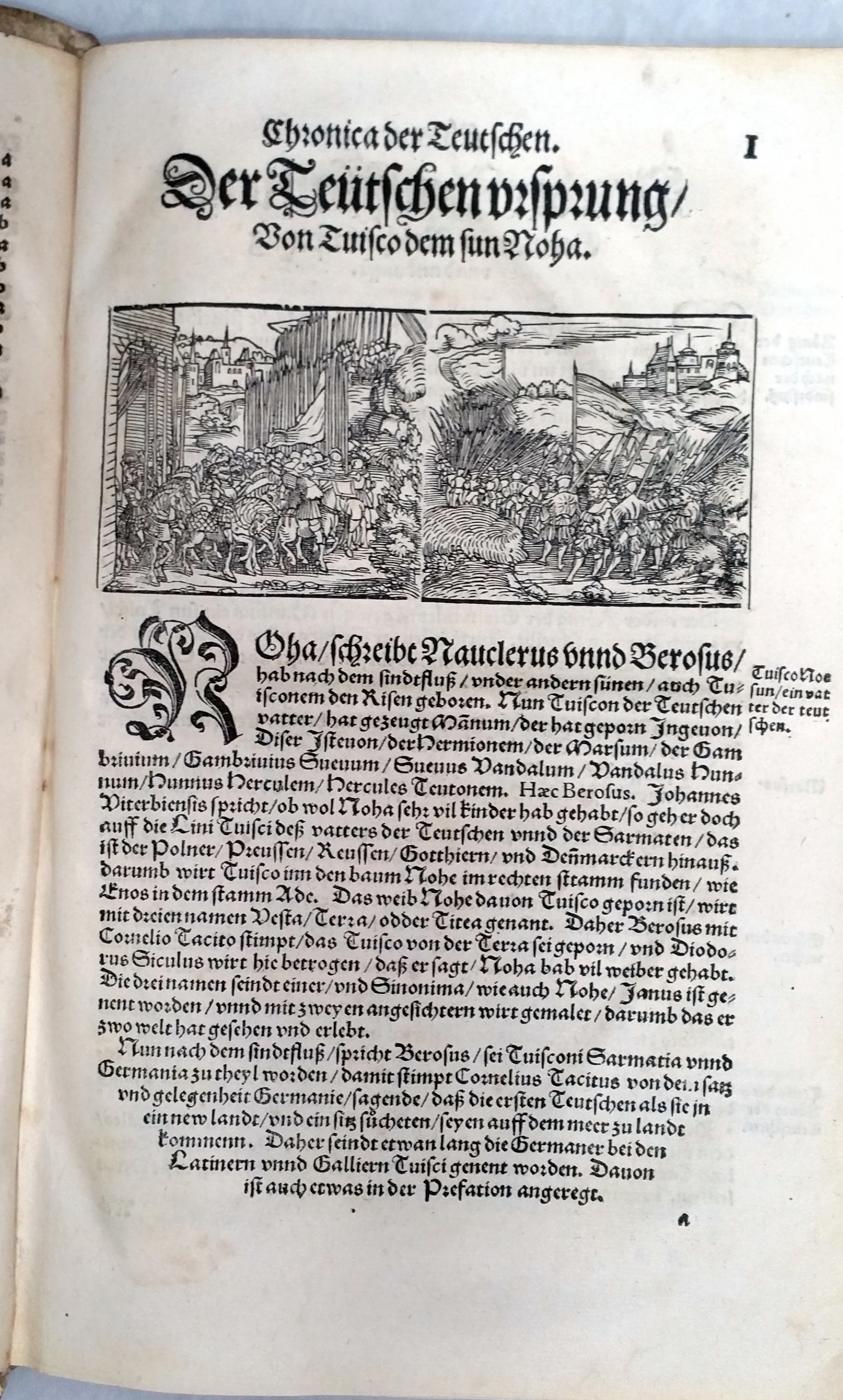 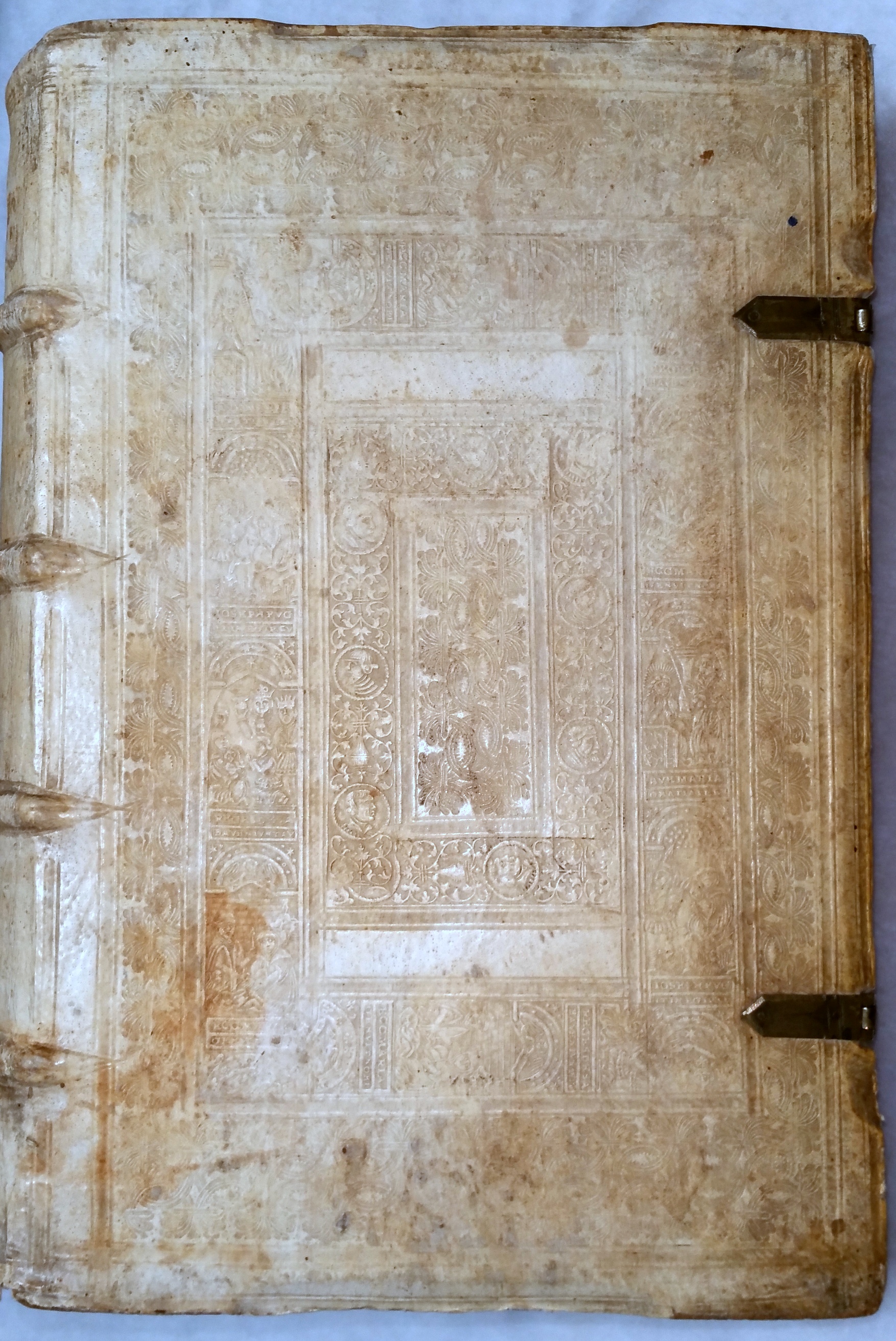 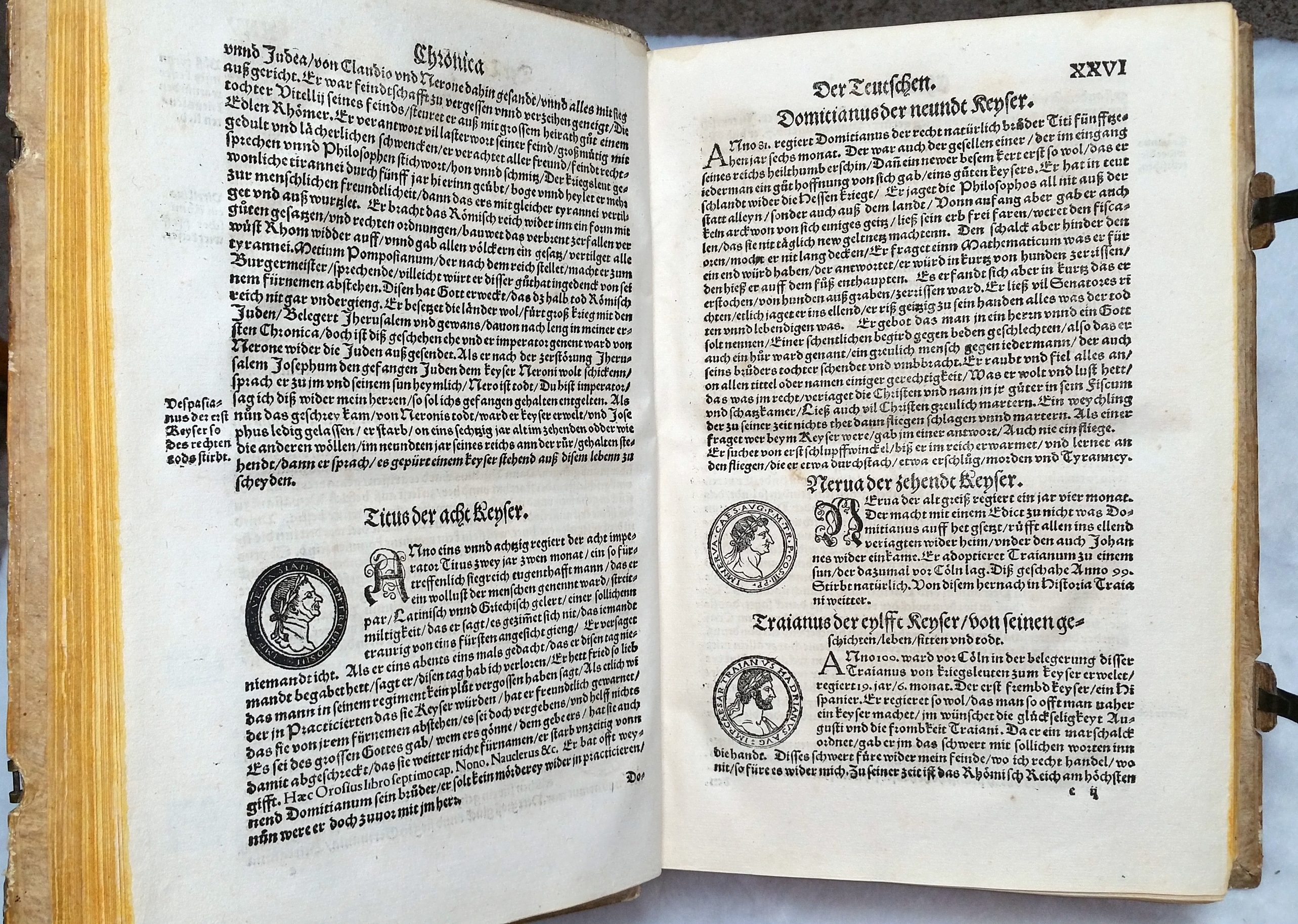 32 nonpaginated pages, followed by 402 leaves numbered in the upper right recto corner (804 pages). Title page with 2/3 of page illustrated. There are 71 small circular portrait illustrations, most appearing as emperors and within the first 100 leafs. Leaves I, VIII, and XIIII all show small illustrations (quarter to sixteenth page). Leaves measure approx. 29 x 19 cm (11 1/2 x 7 1/2 inches). Bound in full vellum with raised spine bands and extensive tooling showing scenes and portraits assumed to be significant to the content. Engraved brass clasps are intact, albeit a bit tarnished. Vellum is rubbed and scuffed, and shows a little chipping and wear along edges. A small section near the center of the bottom cover shows a near circular crack, though there is no loosening of any part. There is slight residue in the upper two compartments on the spine, suggesting previous stickers have been removed, thought residue is very minimal. There are no other signs of institutional markings. The title page is very slightly soiled and shows a few chips along its fore edge. Light moisture tide marks can be seen on the first three leaves following the title page. Occasional light penciled marks and marginalia. This volume remains tight and generally clean. The pages are crisp, bright, and otherwise intact. Sebastian Franck (1499 - ca. 1542) could perhaps be best described as a theologian seeking his theology. Born into the Roman Catholic Church and being named a curate in the Dioceses of Augsburg at the age of 17, he was also an acquaintance of Reformer, Martin Bucer of Heidelberg. In 1525 he joined with the Lutherans at Nurnberg, becoming a preacher for the Reformation. Nevertheless, he soon was disillusioned with their ideology, and found himself moving toward the Anabaptists before denouncing them as dogmatic and narrow. In 1529 he moved to Strasbourg, which was then the center of the Protestant spiritual movement. Here, it appears that his belief turned inward reflecting a mystical Christian ideology based upon inner illumination of the spirit. He identified the Bible as being full of contradictions and being a sort of puzzle or maze that could only reveal itself though the inner spirit. The only doctrines of the Bible necessary for man in their literal meaning would be found in the Ten Commandments and the Apostle's Creed. In Strasbourg, Franck was eventually jailed for his beliefs before being expelled from the city in about 1532. In 1533 he settled in Ulm. However, ongoing conflicts with the Lutherans pushed him from that city in 1539. From there, he seems to have settled in Basel where he likely lived at the time of his death in the winter of 1542-1543. His criticism of the church and organized religion outlined in his writings and "chronicles" drew the ire of Martin Frecht and Martin Luther, the later who dismissed him as speaking the devils tongue. He was banned and even jailed because of his religious views, and his writings were criticized and outlawed in parts of Germany. The current work expands on, and is likely less inhibited, than his earlier 1538 "Germaniae Chronicon" which had resulted in his expulsion from Ulm. Rare in this edition, with WorldCat showing only two copies, and no copies seen at auction over the previous 50+ years.